Startups of today may cause an economic crisis

You might be stunned by the topic of this post and questioned yourself or the person next you”How can startups cause an economic crisis?”

This question is justified, as startups are meant to be the engines driving economic growth with new ground breaking ideas. Startups are companies which have to deal with lot of uncertainties unlike other businesses and these create opportunities to learn and explore new horizons which were untouched till date. This should result in the growth of economy and market. Right!

But in today’s business world, one which is booming with cash hungry startups might result in an economic crisis and markets might crash. But not all cash hungry startups are bad for the economy. It is well know that initially businesses need to acquire customers and improvise their products or services before making any money. This might takes months or even years. In doing so, the money has to be invested in small or large numbers and would solely depend on the scale of  the idea and the business model. Few ideas would require billions of dollars before making any profit and few might break even with investments of few million dollars and scale up with their own profits.

If we notice the current market, the startup companies which have been burning cash are over valued and their valuation in most of the cases is mostly dependent on the previous investments, number of customers acquired, assets and the GMV (Gross merchandise volume) in case of online retail companies. Do I find anything wrong in this kind of valuation? No I don’t. Because that is the most logical way of valuing a business which hasn’t made any profits yet.

But what is wrong is the foundation on which these companies are standing, how these numbers are generated and later sold to the future investor at a highly over valued price. This over valuing results in a company, which in reality has a very low intrinsic value and might not give any returns in the future unless sold to some other investor at higher value.

It is really interesting to understand why this might result in markets crashing and economy slowing down. I am not saying it will but there is possibility of this happening if certain greedy entrepreneurs and investors create and run businesses the way it is being run in today’s startup world. Such greedy entrepreneurs are certainly increasing their wealth at the cost of the economy. I would term these bunch of people in the business world as Greedpreneurs If they had been working on a day job for some firm, they wouldn’t have made so much wealth in the same duration which they have made by burning cash and taking hefty salaries. In several startups, the monetary discipline which has to be maintained for a business appears to be missing. My previous post “Can huge discounts & freebies in the name of customer acquisition help in creating a sustainable business” talks about the cash burning attitude and habits of these money hungry startups. The one supporting these greedpreneurs are investors who don’t want to miss the next apple or google. They are filled with greed and fear. Even such investors are taking home fat salaries from funds raised by the VC firm to invest in startups.

These influences have created a very bad environment in the startup/business world. Talking to many aspiring entrepreneurs or those who have been just funded by angel, shows the adverse affects caused by these greedpreneurs. Most of them would have started the company not to create any groundbreaking product/service, break-even and scale instead with the only vision to get few rounds of funding from VC’s with big valuations, fat salaries and en-cash whatever possible by burning the money before the idea fails or get acquired by the competition. This attitude can be noticed when talked personally with the entrepreneurs or the early employees of these companies which are built on the copied ideas without any further innovation to make them standout in the crowded market.

If I need to take an analogy. Today’s many startups being sold to investors at higher value would be similar to selling of the housing/mortgage bonds in the US during 2007-08 which had no value in the market resulting the global financial crisis. That economic crisis was a result of the housing bubble burst and the next one might be the result of the startup bubble burst.

But one might ask, if companies are having bad business models but still valued high by some investors how the hell would it affect the economy. That is certainly a valid question. The answer to this question is in seeing from a larger perspective and the investments being made. All the billion dollar investments flowing into these businesses are coming from somewhere and it is certainly not from the pockets of the VCs in majority of the cases. VCs are similar to fund managers in the stock market who invest in various businesses with the hope of making money for their clients in the days to come.

The investment money actually originates from pension funds, large corporations, insurance companies, Charitable foundations and similar financial institutions. They are the clients of VCs from whom a VC firm takes money to invest in energizing ideas and startups. It is well know that every investment won’t give a return. Ideally many investments will fail and only few will be the rock-stars of the show who will mange to recover all the losses made in the other investments and profits above that. Common thumb rule is that out of 10 startups, one or two produce substantial returns, another three or four return the original investment, three or four will completely fail. National Venture Capital Association estimates that 25% to 30% of venture-backed businesses fail.

In the current over valued startup up market, if the VC is late to sell his stake to the next investor, the cash hungry startup will get a down round funding. Worst case, no investor jumps in for funding and the business has to pull down the shutters.

As consumers, all of us are hunting for discounts to reap the benefits which are available right now through different ventures around and not bothering about what future has in stock for us. We assume that if the company keeps giving discount by making no profit it’s their loss but our gain and we are saving money. This has adverse affect to the economy which is certainly going to affect all of us on a longer run with the probable crashing of the markets.

An article was published few days ago on fortune.com talking about huge amount of money being raised by the Venture Capitalists to protect their unicorns. Only time will tell how long one would be able to protect an unsustainable business through external funding.

There are certain very smart entrepreneurs and investors who are revolutionising the way we live and the business world with ideas and investments. Just hoping that these people will stop the economy from getting dragged to the floor in the coming years. Currently the situation is like a tug of war happening between these people and the greedpreneurs, where the economy is tied to the rope in the centre. Time will tell which side economy will be dragged when the bubble bursts.

What is Good Design? 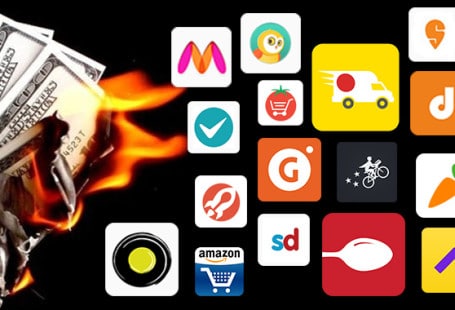